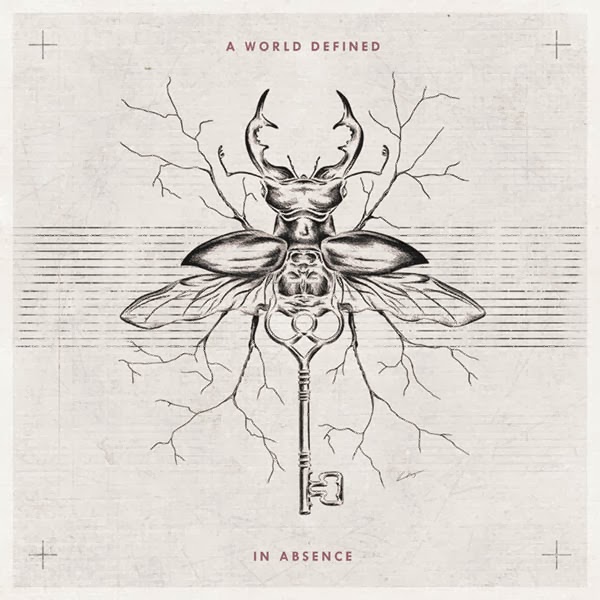 A World Defined are an Alternative Post Hardcore band from Derby and “In Absence”(8) is their first proper release. The band is made up of Liam Reeves (Vocals), Harry Gavuzzi (Drums) Alex Sumner (Guitar), Jord Arnold (Guitar) and Matt Pearson (Bass).

The mini-album kicks off with "June" and a catchy guitar riff backed by electronic beats before exploding into a wall of fuzzed out guitars. Lead singers, Liam’s vocals sound like cross between Thom Yorke and the lead singer of 36 Crazyfists. The song has a catchy chorus that gets lodged in your head for days. This song begs to be released as a single.
The title track starts off very reminiscent of Muse with Liam crooning to a simple piano backing and corkscrew guitar. After a few seconds the rest of the band kicks in with crashing almost tribal drums and chunky riffs. The music twists and turns round a single line refusing to repeat the same musical phrasing.
“The Void” is Thrice-like song with half sung, half shouted vocals and chugging riffage; The song ends on gang vocals before an epic breakdown, Liam shouting “We have all felt this” like a man possessed by pain.
“Gild the Lilly” is an acoustic bluesy number with whiskey soaked vocals; “Brothers” is a relatively straightforward rocker with a catchy echo ladened riff driving it forward. What sets A World Defined from their peers is the attention to detail on each track, showing that alot of thought has gone into composition.
The album ends on “Outro” an ambient electronic instrumental track with a haunting piano, giving the listen time to process what went before.


The album shows the creative diversity within its tracks which invites the listener to repeat the album to discover different layers and textures. The album can be both beautiful and brutal within the space of the same song. This is album for those who demand more than straightforward songs; a must for fans of Thrice, Radiohead, Muse and 36 Crazyfists.