Review of Speaking In Shadows - The Anchor - Released 19th October 2015 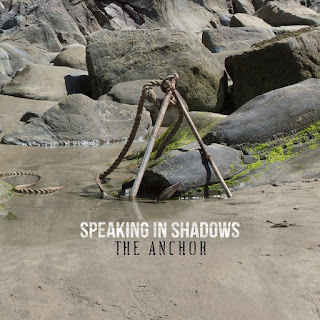 
At 6 songs long it is more of a mini album than an EP and up first is "Capsized" a beast of track with Adam's vocals commanding the listeners attention backed with crunchy riffs and thudding drums. Musically the band don't break new ground but they do the post hardcore formula to perfection.

The band show their more melodic side on "Scatter" and "Figure of Eighty" which will inevitably invoke comparisons to Funeral For A Friend.

Highlights of the album include the sub three minute fast paced "Bite" and the brilliant "And Grit" which starts with stomping beat, palm muted guitars and silky smooth vocals reminiscent of Harry Radford(Yashin); Exactly 30 seconds into "And Grit" the band unleash the beefiest guitar riff with an amazing tone that any guitarist would crave.

The album ends on "Easy For You" which is a straight down the middle track with some good guitar work which keeps it interesting. A must for fans of Funeral for a Friend, Deaf Havana and Mallory Knox.

The EP is released today go grab yourself a copy Here
Posted by Unknown at 13:11 No comments: