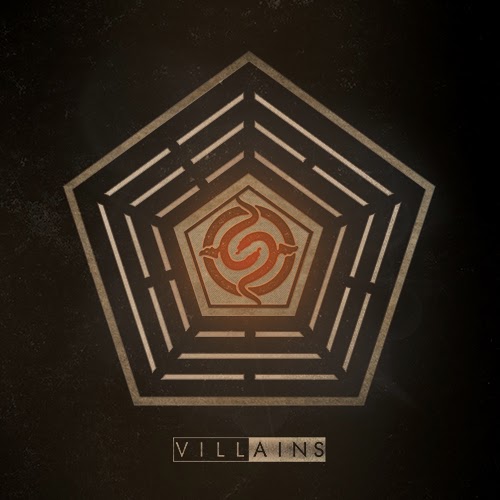 Villains are an up and coming Alternative band from Chelmsford who have previously toured with hard rock bands Soil and Fozzy. They were previously known as “Never Means Maybe” until they changed their name in 2012.

Their album Villains(9/10) kicks off with “The Way I Tell Them” starting with a wall of glorious guitar noise then lead singer, Renz’s vocals kick in complimenting the higher pitched lead guitar tone.  The backbone of the track is the chugging guitars, and a bass line reminiscent of Rise Against.
The lead single “The Fall” is combination of chunky riffs, multi tracked vocals and a chorus that will get stuck in your head for days. “Bleed” has a grunge feel to it with amazing passionate vocals and pounding drums. The whole album slows down for “The Light Outshines The Star” a beautiful ballad showcasing Renz’s amazing vocals with a marching drum beat, lush guitars and a soaring chorus.

The vocal interplay between Renz’s lead and the rest of bands backing vocals is reminiscent of Taking Back Sunday's earlier work. This is most evident on “Come Out and Play” an upbeat number with a frenetic pace, catchy chorus leaving the listener breathless. The track somehow combines post hardcore aesthetics, hard rock riffs and indie atmospherics to make an exciting listen.  “Visions” was made for live performances, where I can envisage the band getting the crowd chanting the catchy “theres no coming back” refrain.

What sets Villains from many of their peers is Renz’s vocals which an impressive range from silky smooth croon to full tilt shout, aided by the rest of band providing backing harmonies.


The album ends on “The Hardest Part” which starts with just guitar and vocals and slowly builds up layers of guitars and vocal harmonies before ending on a single guitar phrase. Because of the meticulously crafted layers of guitars, percussion and vocals every listen yields more and more detail.
This album will stay with the listener long after the album has finished.  This is an album for fans of Mallory Knox, Thrice, Jimmy Eat World and Taking Back Sunday. The album is the work of band who have  strived hard and created a truly amazing record.

Villains will be released on the 24th February 2014

Pre-order now you know you need this record:- http://www.villainsuk.bigcartel.com/