Review of "Darkness Of An Age" by Exist Immortal 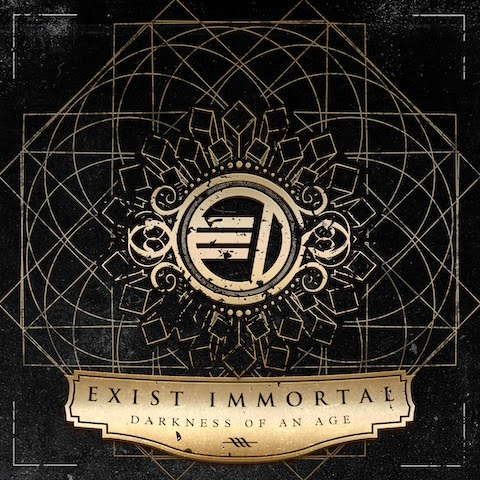 Exist Immortal are a Metalcore band from West London and their debut album, Darkness Of An Age(8/10) is released on the 12th May 2014.

After a short intro of "Insanity Project" a spidery guitar riff starts up before the listener gets bludgeoned by heavy shouted vocals and a chugging wall of guitars. Seconds later the clean vocals kick in and it becomes clear that lead singer, Meyrick de la Fuente, can actually sing, unlike some of his peers in the same genre.

The highlight of the album is "Legion" a perfectly balanced mix of heavy vocals, staccato down-tuned guitars and clean melodic chorus that will get lodged in your head for days.

The album has sufficient diversity including the multi-layered guitars of "In Parallax", the more accessible single "Edge of Infinity", the group vocal led "Imperator" or the doom laden "Desolace".

The core of melody which runs the length of the record stops the behemoth of guitars and shouted vocals collapsing upon itself. There is sufficient brutality to keep the metalcore legions happy and enough diversity to appeal to hard rock fans in general.

The album closes on "The Omen Machine" a 7 minute plus sledgehammer of a track which ends in a piano outro giving the listening a rest from being pummeled by riffs.

The band have fused technical metal riffs, driving rhythms, epic solos with vocals that go from all out aggression to melodic clean singing. This album is recommended for fans of Bring Me The Horizon, Memphis May Fire, Fear Factory, Machine Head and Killswitch Engage.

See below for their video for "Edge of Infinity"