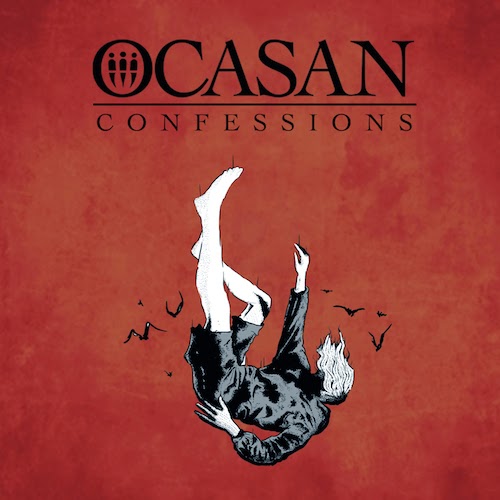 Ocasan have been together for over a decade relentlessly touring spreading their own brand of pop rock. The band consists of Nick Burns (vocals), Luke Mcdonnell (Drums) and Nathan Naidoo (Bass). "Confessions" marks the end of a trilogy of EPs forming an album titled "Elixir".

The EP kicks off with title track "Confessions" which lyrically is told from the point of view of a wealthy woman has been seduced by the caretaker of her home (bit weird); Musically its Mallory Knox-esque pop rock with chugging riffs, melodic vocals with driving drums and a big bass-line.

The second tracks is "Dark Cloud" a multi-layered track with heavier riffing in verses which relents for a soaring chorus. Nick's vocals shine through the dense mix making this track the standout track on the EP. "Invincible" builds on the formula of the album but packs in more riffs, more drums and a tighter bass line.

The EP ends on "Parasite" with its You Me At Six rock stomp and cabaret style backing vocals. The hooky guitar work adds to the fun of the track and Nick's vocals take on an almost punky edge.

This short but sweet EP is packed full of big hooks, catchy quirky songs, which may appeal to fans of Mallory Knox, Fall Out Boy and Panic! At the Disco.