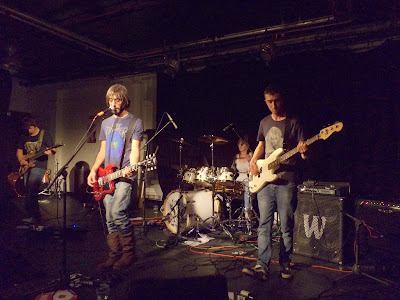 
They closed with a passionate version of their song “My Heroine” which shows the diversity of the talented band. Because of previous bands over running and poor scheduling , Crowley’s Tears were cut off just as they were reaching their stride.
Crowley’s Tears will be performing at Level 2 above Roundabout on Halloween.
Posted by Unknown at 09:28 No comments: 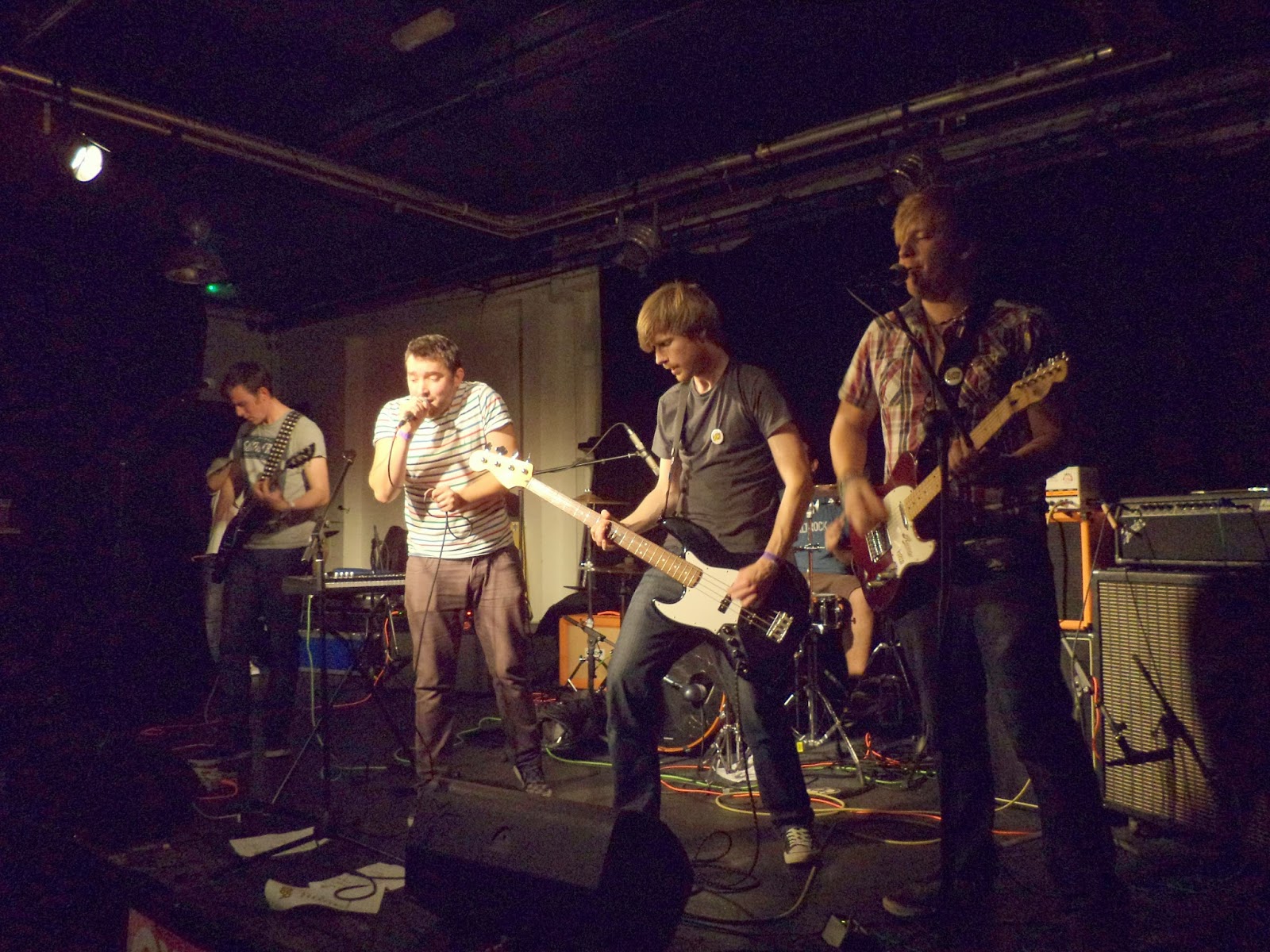 LGM One(9) are a Plymouth based who we previously saw playing at the White Rabbit and Level 2 above Roundabout. They take elements of punk and mix it with funky keyboard lines and bass.


They kicked off their set with a new number “Record Store” which laments the demise of writer’s favourite record store. The song had an indie flavour and marked a departure from their usual sound.


The band has expanded since last time we saw them, adding a full time bassist leaving Geoff Heap to play guitar. The new Bassist, Ben Diffey was pretty handy with his bass, playing as if he had been with the band for many years, rather than a few sessions.


The band hit their stride around “Re-awake”, the established songs benefitting from the expanded sound. They then powered through “Inferno” and new song “Tattoo”, barely stopping for a breath between. This is the sound of a band maturing and finding their unique sound.


The set ended on “Destroying Onions” which had a pounding drum beat and catchy vocals. Freed from playing guitar and keyboard, lead singer Dave Wells was able to concentrate on delivering catchy keyboard lines which set LGM One apart from other similar bands.  Judging by the gathered crowd’s reaction, they gained some more supporters for their funky punk cause.
Posted by Unknown at 09:06 No comments: 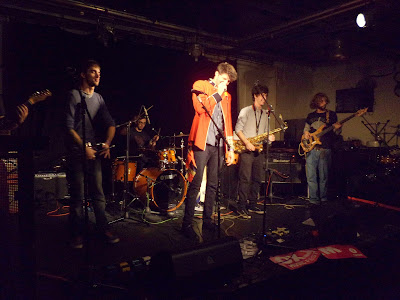 After much technical difficulties, Shoot The Moon (7) eventually hit the stage playing a mix of ska and punk. The band originates from Bristol and the South West.


Their original songs are fun and definitely worth a listen if ska or punk is your thing, although they could use a few more memorable hooks. They mix funky bass lines, brass flourishes and solid guitar playing to deliver exciting songs.


As part of their set they played a very good ska cover of Cypress Hill’s “How I Could Just Kill a Man” and “Jump Around” which was later changed to ‘sit around’ due to lack of participation. It would have been nice to see a cover of Sublime thrown in to the mix.


The band closed on their strongest cover “Ska Wars” by Capdown which brought everyone alive. Unfortunately the wait before the band played did not endear the band to the SU Bar crowd but they still played their hearts out.
Posted by Unknown at 13:56 No comments: 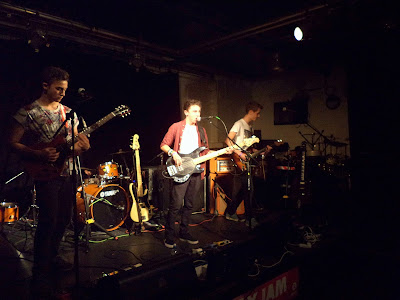 The first band we saw were Ten Zero One (8) a young band (all members 15 years old) from various parts of Devon. The band having played at the O2 in London, Plymouth SU bar probably seemed rather small.

The band kicked off their set with an amazing cover of “Slither”, a song originally performed by Velvet Revolver which was clearly meant as a statement of intent. Despite their junior years their proficiently with their instruments and lead singer/ bassist Max’s vocals were of a very high standard.


The remainder of their set consisted of self-penned songs, although not all hit the mark square on, they were all enjoyable. Highlights “Pigs of War”, “Look at Me” and “Crazy Jane”. The two guitarists were very talented seamlessly playing complex solos and hard rocking riffs. Max was a good frontman despite his slight stature trading banter with the band and the audience.


This was the sound of a tight unit who were confident playing together. Their set ended on their most effective song “On the Edge” with its staccato feel and repeated chorus building up layers of the song. This is a band to go watch now and to expect big things from in the future.
Posted by Unknown at 10:39 No comments: 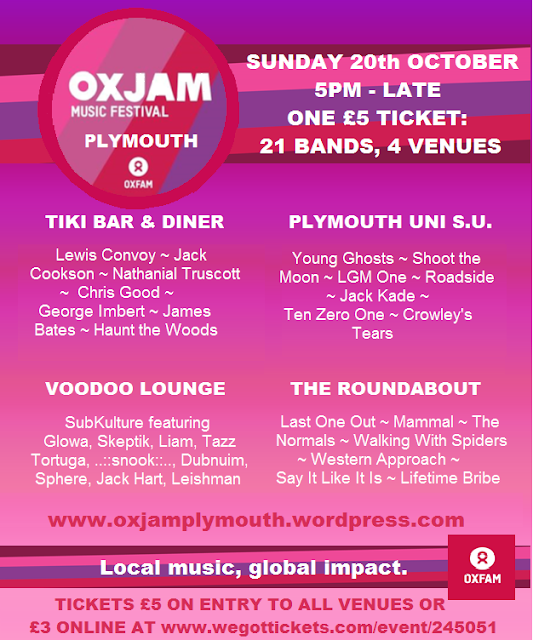 Oxjam Plymouth, is a music event with many local bands playing on one night. The aim of the event is to bring the Plymouth music scene together to help raise money for the charity Oxfam.

The event will be held on Sunday 20th October 2013. The venues include Student Union Illusion Room, Level 2 above Roundabout, Voodoo Lounge and The Tiki Bar.

The Plymouth event, part of a UK-wide festival happening the same weekend in October, will give Plymouth a chance to see some of the most talented bands in the area and help a worthy cause.

We will provide you more information once received, remember to keep the date clear!

For more Plymouth Rock news follow us https://twitter.com/plymrockscene
Posted by Unknown at 10:04 No comments:

Email ThisBlogThis!Share to TwitterShare to FacebookShare to Pinterest
Labels: Plymouth

Anavae - Anti-Faith music video - you have to watch this

Check out the new video for the Anavae song Anti-Faith - it is is epic:-


We caught up with the band performing at the White Rabbit - Plymouth, check out our review:-

Check out this new band, White Clouds and Gunfire, they are excellent - Here is their latest video Poison - Enjoy!!!

Evilyn(7.5) had everything the crowd wanted and proved to be great choice of support acts, with soaring vocals, synthy backing track, heavy guitars, pounding drums and fat bass lines. The riffs were more metal than AshestoAngels punk reference points.

The band kicked off their set with their latest song "The Fire" which is reminiscent in song structure to a 30 Seconds to Mars song, but with added heaviness. Ryders vocals shone through, despite the amazingly poor sound from the White Rabbit desk, which buried them deep in the mix ,behind the wall of guitars.Their set ended on the politically charged "The War Is Now" which was an explosive end to a great set.

Tonight Plymouth welcomed Evilyn, as if they were a local band and they will surely return. They are definitely a band to check out if you get a chance.

AshestoAngels (9.5) hit the stage launching into "Dolls Dolls Dolls" with the crowd chanting "we are, we Are" before following it up with the amazing "Dorian" and "Ugly Club" in quick succession. By this time the crowd were bouncing up and down enjoying every word. The band played as a tight unit with Nico's bass lines perfectly in sync with Jim on drums.

Crilly was on top form, swinging on railings, crowd surfing with little regard for his own safety, much to the delight of the eager fans. As on every occasion we have seen them, Falkor's playing was sublime showing such dexterity and skill.

By the time the familiar synth introduction to "Wintervention" came on the band were joined by members of the audience for a sing-along. If the national grid could tap the energy from AshestoAngels, they could surely power the whole South West.The set ended on "Ghost Frequency" off their latest release "With Tape and Needles" which is a slower more chugging song showcasing Crilly amazing vocals, before the band exited the stage.

The crowd chanted "one more song, one more songs" until AshestoAngels returned to the stage presumably after drinking copious amounts of water.The encore included lively versions of "Hanging Tree" and  "The Gartland Theory", off their first album. These older songs were given a more punk feel, when played live, with frantic playing from Nico and Falkor.

AshestoAngels came, played and conquered the White Rabbit, not just pleasing their die-hard fans but introducing new fans to their brand of synthy gothic inspired punk . Not only can the band play with such enthusiasm and skill, they give so much of themselves to their fans.

Our apologies to Occulus and Silly Band who we did not manage to catch on this occasion.

Tonight Alive - The Other Side Review 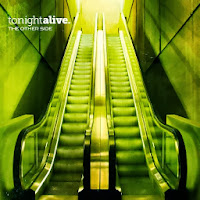 Tonight Alive are a female fronted punk pop band from Australia fronted by the charismatic Jenna Mcdougal. Their first album was a fun collection of catchy pop punk songs, but lacked the attitude which was bubbling under the surface.

With this latest release, The Other Side (8.5), they have added more crunch to their sound with tracks like "The Ocean", "Lonely Girl" and "The Fire". The riffage adds a welcome dimension to their brilliant sound. Occasionally Jenna sounds like Hayley from Paramore; and sometimes Amy from Evanescence.

The only disappointment is that the album does not contain the single "Breakdown", recorded with Benji Madden of Good Charlotte, maybe due to contractual difficulties.

However, when they do explore their gentler side on the sublime titular track , "Bathwater" and "You Don't Owe Me Anything", the guitars are solidly chugging away, which stops it being too sweet.

This is a solid release and explores a harder edged sound without alienating fans of their earlier releases. The band are poised to take the scene by storm. Expect to hear alot more.
Posted by Unknown at 16:41 No comments:

Oxjam Plymouth, is a music event with many local bands playing on one night. The aim of the event is to bring the Plymouth music scene together to help raise money for the charity Oxfam.

The event will be held on Sunday 20th October 2013. The venues include Student Union Illusion Room, Level 2 above Roundabout, Voodoo Lounge and The Tiki Bar.

The Plymouth event, part of a UK-wide festival happening the same weekend in October, will give Plymouth a chance to see some of the most talented bands in the area and help a worthy cause.

We will provide you more information once received, remember to keep the date clear!

Roundabout Level 2:
Last One Out
Mammel
The Normals
Walking with Spiders
Western Approach
Say It Like It Is

"Oxjam Music Festival is a nation-wide festival that celebrates local talent, provides great entertainment and donates all it’s funds directly to Oxfam. In October 2013, hundreds of musicians will perform in towns and cities throughout the UK to raise awareness and donations towards this amazing charity. What makes this music festival completely original and unforgettable is not only that it is organised entirely by volunteers, but that it unites entire communities through an appreciation of their own home-grown talent. A great amount of dedication, time and training is put in by the Oxjam teams and gig-makers to achieve a festival that is bigger and better than the years before, and, as the festival grows, the larger the positive impact becomes that Oxfam can make across the globe. For more information, please visit the Oxfam website!"
Posted by Unknown at 11:10 No comments:

Email ThisBlogThis!Share to TwitterShare to FacebookShare to Pinterest
Labels: Plymouth

Check out Hawthorne Heights latest video for Golden Parachutes off their massive Zero album which we reviewed here http://plymouthrockscene.blogspot.co.uk/2013/07/hawthorne-heights-zero-review.html